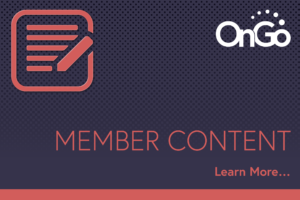 As a result of this FCC approval and joining the OnGo Alliance, 4RF is listed here on the OnGo Alliance’s website and in the OnGo Alliance list of FCC-Authorized End-User Devices as a vendor whose Aprisa LTE router interoperates with other OnGo Alliance member products to enable private CBRS LTE networks. OnGo Alliance advisor members such as 4RF are invited to provide specific industry perspectives on the applications and use cases for CBRS LTE solutions to their businesses.

This announcement follows a similar 4RF announcement of FCC certification for the 4RF Aprisa LTE router to operate in the Anterix Band 8 900 MHz spectrum for private LTE networks. 4RF also is a charter member of the Anterix Active Ecosystem Program and a founding member of the Utility Broadband Alliance (UBBA).

“The OnGo Alliance is very pleased to have 4RF join our growing membership,” said Alan Ewing, OnGo Alliance executive director. “The 4RF ecosystem contributions and experience with mission-critical private LTE networks is a welcome addition to the diversity of solution providers under the OnGo umbrella.”

“With FCC certification for the 4RF Aprisa LTE router to operate in 3.5 GHz mid-band spectrum and membership in the OnGo Alliance, 4RF is ready to service the needs of CBRS users and we’re currently working with various customers to assist with deployments,” said 4RF CEO Ian Troughton.  “We have the 4RF Aprisa LTE router, implementation advice and support, and the ancillaries such as antennas to help make successful use of the 3.5 GHz band. 4RF Aprisa products are successfully deployed in hundreds of utilities around the world including many of the largest in the United States.”

The 4RF Aprisa LTE is a secure, hardened LTE router for mission-critical field area networks. With this approval the Aprisa LTE continues to bring innovation to the LTE market. Examples include the first field router to offer SFP transceiver support for optical fiber and the first Anterix Band 8 certified device to offer built-in Wi-Fi operation. The Aprisa LTE meets key utility demands with dual SIM support for private LTE as well as public networks (ATT, Verizon, and UScellular approved), a very wide range of operating bands, enterprise-ready routing, and security features (including anti-tamper), along with the heavy-duty transient protection mandatory for protection in the electric grid deployment including substations. The device is also at home in mobile applications meeting tough vehicle electrical and vibration standards. More information about the 4RF Aprisa LTE router is available in its datasheet, here.

4RF is a world-class designer and manufacturer providing radio communications equipment for critical infrastructure applications to over 150 countries, for utilities, oil and gas companies, smart grid, water and wastewater, and other applications. 4RF products deliver highly secure communications, support serial and IP traffic, and are optimized for robust performance in temperature extremes and other harsh environments.

4RF, the 4RF quadratic device, and Aprisa are trademarks of 4RF Limited.

AT&T is a trademark of AT&T Intellectual Property II, L.P.

LTE is a trademark of ETSI, used with permission for Aprisa products containing LTE functionality.

OnGo and the OnGo alliance logo are trademarks of the CBRS Alliance.

UScellular is a trademark of United States Cellular Corporation.

Verizon is a trademark of Verizon Trademark Services, LLC.